​Pass Set Crush provides a little of everything 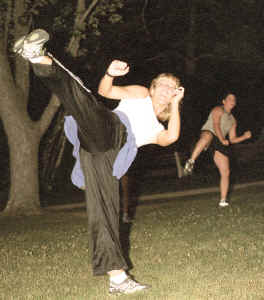 MOULTONBOROUGH — Are you looking for a unique volleyball experience? Then the Pass Set Crush overnight volleyball camp held at Geneva Point in Moultonboro is the place to be.

Now in its third year, Pass Set Crush provides girls entering grades 6-9 the "complete summer camp experience with a concentration in volleyball, targeting girls that have started to develop a passion for the sport," according to camp director and founder Joan Forge.

"I was a girl scout, and I’m a volleyball coach with a minor in recreation, so it all came together," said Forge of her creation which is limited to 42 girls and is held during the summer in two five-day sessions. This year’s first session was held from July 15-19, and the second began Sunday and runs through Thursday.

In addition to getting first-rate tutoring in the sport of volleyball, the girls take part in normal summer camp activities, taking advantage of Geneva Point which is located on nearly 200 acres of woods and open land on the shores of Lake Winnipesaukee.

Forge decided to hold the overnight camp for the middle school aged girls after running day camps for several years and noticing that they were not mixing well with the higher skilled high school and college girls.

"The younger girls were getting turned off by the experience instead of being turned on to the sport of volleyball," Forge pointed out.

So along with the help of her neighbor Brad Wolfe, the waterfront director at Geneva Point, Forge brainstormed the idea for a combined volleyball/summer camp and put it into action in the summer of 1998.

The tutoring the girls receive at the camp is top-notch. Forge is a physical education teacher and coach at Gilford Middle-High School, and she has her masters degree in sports and recreation management. Forge has been a teacher and coach of girl’s sports for over 20 years, and her expertise in the sport of volleyball has helped Gilford earn eight appearances in the state finals, with five state championships including the past two Class M titles.

Among the assistant coaches are current Gilford standouts Mollie Babcock and Vanessa Lavallee as well as former GHS star Sara Anthony. Amy Tarte of Inter-Lakes and Michelle Villeaume, the Class S Player of the Year from Concord Christian, and Salem’s Tom Dzioba are three more assistants of note.

Head coaches include the Meredith mother and daughter tandem of Randy and Anna Mattson. Others include Brook Johnson, Michelle Martin, Michelle Cassidy and Michelle Demers.

A typical day at the camp has the girls being woken up by Forge’s singing at 6:45 a.m. They then have the choice of getting their day started with either a Polar Bear swim or a fun run.

After breakfast it’s on to the volleyball court from 9-11 to work on skill development through drills, challenges and scrimmages. Lunch follows the first training session, then it’s back to the courts for more volleyball instruction until 3:30 p.m.

Dinner is served 5:30 after a period of free time. From 6-8 p.m. the campers split in two groups with half enjoying a sunset canoe trip while the others complete a low ropes course. The groups take turns switching between the two activities throughout the camp.

On each night a different local expert takes center stage from 8-9 p.m. Tammy Levesque of the newly opened Fitness Edge Health Club in Meredith put on a kickboxing clinic Sunday.

"We try to tire the girls out on the first night so they go right to sleep," said Forge with a laugh. "Unfortunately that doesn’t always work."

Monday night Amy Lauria, an assistant volleyball coach at Gilford, does a program which incorporates massages, relaxation, yoga and pilates. Tuesday is country line dancing, directed by another former Gilford star Amber Greenlaw, and put on by Babcock and Lavallee. On the final night (Wednesday), each cabin put on skits.

Each night ends with ice cream and a campfire before the girls report to their cabins at 10 p.m.

Other special events that take place are the Beach Barbeque on Wednesday, the Water Carnival on Thursday afternoon, and the high ropes (20 to 30 feet) challenge course.

While most of the campers are from New Hampshire, girls from as far away as North Carolina, Montreal and California have been in attendance, showing that the camp is growing.

"The Internet has brought a lot of people in," said Forge of www.passsetcrush.com. "The camp is growing, but I’d like to keep it at 42 girls a session with two a summer. But as the sport of volleyball grows, I might add a third. Right now two sessions per summer is enough for me." 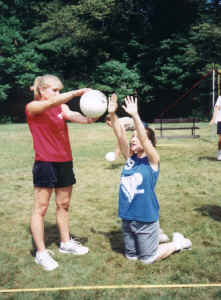 Rachel Burack, left, of Meredith and Caitlyn Josten of Gilford work on a drill at the Pass Set Crush volleyball camp at Geneva Point in Moultonboro. (Courtesy Photo)