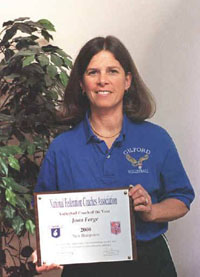 GILFORD — On the volleyball court, she's known as one of the most competitive coaches in New Hampshire. But when she steps off the court, she’s known by her players as a devoted friend. It's that ability to combine coaching with caring that makes Joan Forge the top high school volleyball coach in the state.

Following many successful seasons as the Gilford High School head volleyball coach, Forge's dedication to the sport and to those she has tutored has been rewarded. She recently garnered one of the highest honors in high school coaching, as she was named the National Federation Coaches Association Volleyball Coach of the Year for New Hampshire — an honor for which she credits her players.

"The kids who play volleyball are very passionate about it. It's a very addicting sport," said Forge, who doubles as the GHS softball coach. "Even in my (Physical Education) classes, all the kids want a volleyball in their hands."

It's hard to imagine, even with all the success Forge and the Golden Eagles have enjoyed over the years, that Forge's run almost never happened.

The choice to hire Forge, in fact, turned out to be a perfect fit. After serving several years as a volleyball official, Forge turned around the school's volleyball program and made some life-long friends in the progress.

Sarah Anthony is one player who will always call Forge a friend. Anthony earned New Hampshire Player of the Year honors in 1997 and became the first GHS volleyball player to earn a four-year college scholarship, accolades to which she credits her former coach.

"She's created a really strong bond with her players," said Anthony, now a junior at Elon (North Carolina) College. "It meant a lot knowing someone was there as a coach or on a friendship level. I've always seen her as a really good friend."

While Forge does have a caring side, she also is a fiery competitor who demands the most from her players. Every year, junior setter Mollie Babcock and the rest of the team sees Forge's demanding, yet fun side when the season opens with a midnight practice.

"She says she always wants her team to be the first to start the season and the last to finish," Babcock said. "She gets us out for a midnight practice to start the year. It isn't mandatory or anything. She splits us up into teams and we play a few games. She likes to make it fun for us."

The real fun has come on the court. During her 16-year stint at Gilford, Forge has compiled an overall record of 242 wins and 53 losses. The Golden Eagles have won five Class M state championships in the past six years, including this season when they upset once-beaten Belmont in three games in the Class M title match. The Golden Eagles also have made eight Class M finals appearances in the past 10 years under her tutelage.

"She's a strong competitor and she really hates to lose," Anthony said. "To have a coach who does not like to lose is good for the players to see.

"I especially miss those games with Belmont," Anthony added. "I miss those days so much. They were such a rival with us and Coach Forge always knew how to get us ready for those games."

The success, however, wasn't always there for Gilford. In the three years prior to Forge's arrival, the Golden Eagles failed to win a game, much less a match. In Forge's first season in 1985, Gilford struggled to a 6-10 mark.

The turnaround began the following year, when the Golden Eagles posted a 13-4 mark. The winning hasn't stopped since then.

Since 1986, the most losses Gilford has sustained in one season came in 1988, when the Golden Eagles dropped six matches. The victories, however, play second fiddle to Forge when it comes to her players. Even with all the victories, Forge insists those who play for her first enjoy what they do.

"The overall philosophy of the program," Forge said, "is to have fun. We don't measure our success in wins and losses. The goal is to improve throughout the season and to have fun.

"Coaching is a passion," Forge added. "The players here at Gilford have given so much of themselves, and I appreciate it."

When all is said and done, Forge said her career won't be measured by the success of her teams on the court, but by her players' success in life.

"It doesn't matter what sport I've coached. My passion is to watch these young girls grow into young women," Forge said. "When they come back and tell me what I've meant to them, that's why I do it."